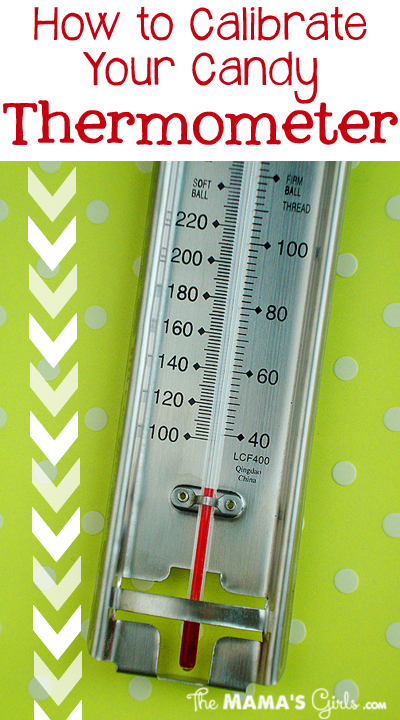 If you have ever felt apprehensive when it comes to making homemade candy, read on…this will change your life!

A few years ago, I learned the trick to making perfect candy. What I learned was that it’s very important to calibrate the candy thermometer before starting each batch. (When the thermometer is off even by only a few degrees it could mean the difference between soft taffy and a candy cane!)

To calibrate the thermometer, bring a pot of water to a boil with your candy thermometer clipped to the side of the pan. (Make sure it is not touching the bottom and also make sure there is enough water so that the pot won’t boil dry in 10 minutes!) After it has been boiling for 10 minutes, check the temperature. (Keep in mind that water boils at 212° when at sea level.) The reading on your thermometer will vary based on the thermometer itself, the altitude, the weather, the atmospheric conditions (like barometric pressure), etc. Oh, now I’m beginning to sound like a nerd!

It’s really not a big deal to calibrate the thermometer. I figure that if I’m going to go to all the effort and expense to make homemade candy, I don’t want to ruin the batch, so I do this every time.

Now, if you try this and for example, your thermometer reads 209°, you would need to subtract 3° from your desired cooking temperature (remember the standard is 212°.)

Now that you know the trick, your candy should turn out perfectly!

2 thoughts on “How to Calibrate Your Candy Thermometer”