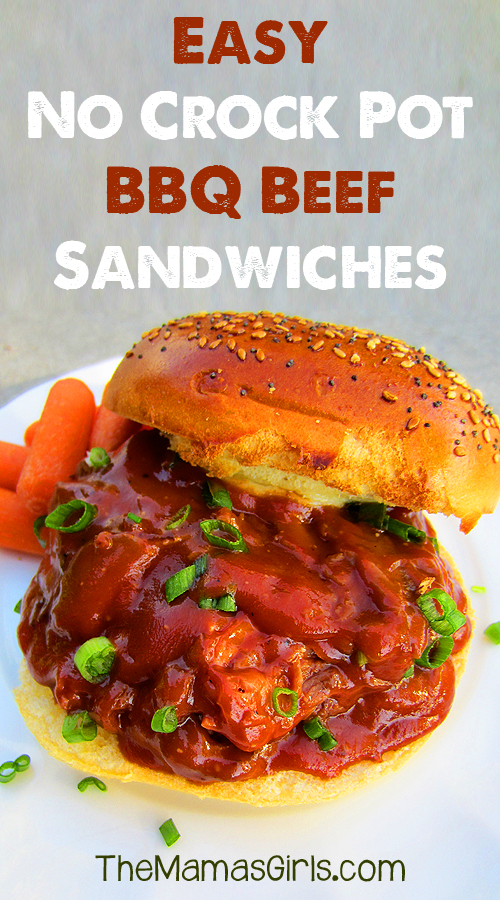 I love BBQ Beef.  I usually make it in the crock pot, but I just discovered a new version of how to make them even if you forgot to plan ahead.  You just take some good old fashioned roast beef deli meat, and smother it in a creamy BBQ sauce. Then, you toast your favorite bun with some provolone and finish it with some sliced green onion.  I’m salivating just thinking of it.  Here’s how you make it.

Combine BBQ sauce, brown sugar, cream cheese, Worcestershire, and ketchup in a sauce pan over medium heat. Whisk continuously until blended.  Reduce heat and add deli meat, one at a time until heated through.  Reduce heat to warm while preparing the buns.

Turn your oven on to BROIL LOW, and move rack up until it is about 6 – 8 inches from the top burners.

Slice buns in half and lay them out open faced on a baking sheet.  Place one slice of provolone per sandwich. This will toast one of the halves and melt the provolone on the other.  Broil them for about 2 minutes or until golden and the cheese is bubbly. Watch them carefully.  Once they start to brown, it is easy to burn.

Take the buns out of the oven.  Add BBQ Beef mixture  and top with some green onion. Cover with the other bun and enjoy! Serves 12 – 14.