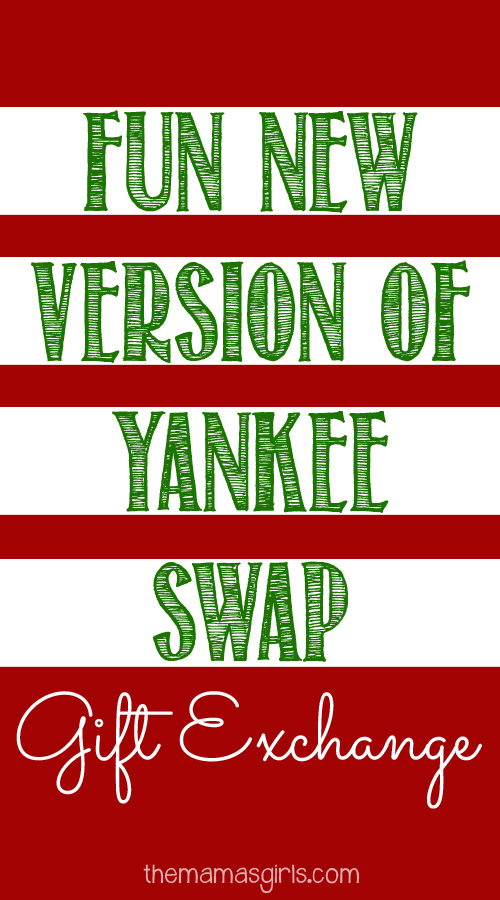 Our extended family is growing rapidly, so a few years ago,  instead of buying gifts for the masses, we decided to do a Yankee Swap to exchange gifts for the Holidays.  That way,  each  person brings one gift, each person goes home with one gift, and we all get to play a fun game together to get them.   If you’ve done Yankee Swaps, you know that sometimes you hit the jackpot and get something totally useful, but other times your gift is snatched away, and in an instant you could be left with just a truckers hat that says something like “I Eat Glue”.  (It really happened).  I personally love Yankee Swaps, and since we do them every year, I thought it would be fun to put a little different spin on it this year.  Here’s the game plan.

Usually in Yankee Swap, a number is assigned to everyone at the party.  Everyone draws a number. Then you go in the order of your number, taking turns choosing and opening  gifts.  If someone opened something that struck your fancy, when it becomes your turn, you have the opportunity to steal it.  The person who the gift was stolen from can then either steal from someone else or open a new gift.  Fun game right?  So here’s the twist.

In my version we are all going to draw numbers, but they are hidden in ornaments on the tree.  In addition to a number, everyone will have a card giving them the ability to “steal” or to “swap”.  All of the stealing and swapping will be done before any of the gifts are opened.  Dun, dun, dun.  I just made some of you very nervous…

Preparation for the Host:

All you need to do find some way to randomly assign a number to each gift brought to the party, and then randomly assign a matching number and along with a “steal” or “swap” card to each one of your guests.  You could do that a number of ways, but here’s how I’m going about it.

I went to Michael’s and got some clear plastic ornaments.  I thought it would be a cute way to draw numbers if they were already incorporated into the ornaments on the tree.  This way, the game is set up waiting and ready when we are.  Essentially, I just cut out some cute scrapbook paper squares about 3 in. by 3 in. so it barely stuck out the top. This way you could roll it up and easily pull it out.  I wrote each number up to the number of guests participating on the back of each card.  Then I made enough “swap” cards to go with half of the numbers and enough “steal” cards to go with the other half of the numbers. I paired each number with either a “swap” or a “steal”  card, and then I  rolled them up, and tied it with a bow so they would stay secure.   I then, slid the paper roll into the ornament and replaced the hanger.  They made a cute addition to the tree and little does anyone know they will actually be used for the game.

Directions to read to your guests:

This is no ordinary Yankee Swap.  Before any of the gifts are opened, you will have the chance to swap or steal a gift. But nobody will know what they are swapping or stealing because you do all the swapping and stealing before you open a thing.  Everyone will choose a clear plastic ornament with the paper roll containing a number.  Open the ornament to reveal your number.  The ornament will also contain either a “swap” card or a “steal” card. Disregard that for now, and go  find the gift with the same number you just drew. Return to your seat with your gift or…what will be your gift for a time. 🙂  In order, starting with 1, begin the swap process.  If you were given a “swap card”, you may opt to forgo the card if you would like to keep the gift you were matched with.  Should you choose to use the swap card, you may only exchange gifts with the one person you would like to swap with. They give you their gift and you give them yours, and the turn is over.   If you were given a “steal”, and you choose to use it, you can steal someone’s gift. They can then either take your gift or take someone else’s gift. If they steal someone else’s gift, that person then must take your original gift, and the turn is over.  Each individual gift can only change hands a total of  3 times.  That means after the third person possesses the gift, it is locked and cannot be swapped or stolen again. After each person has had their chance to change his or her gift, you then open them up the gifts, one by one, in order, again starting with 1.  Are you feeling lucky?

Have fun with the game and let us know how you do the gift giving at your family parties.