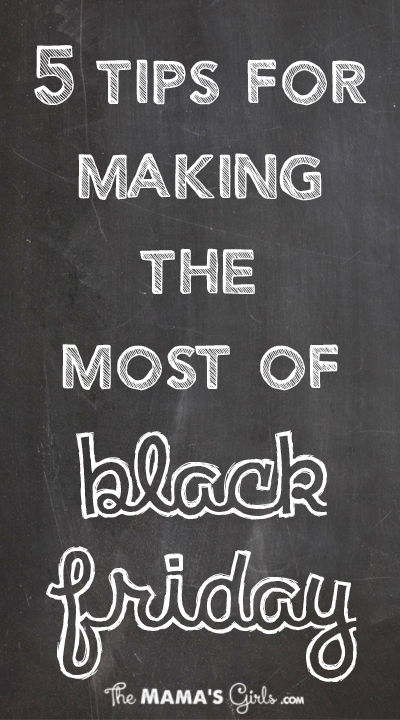 There is no middle ground when it comes to Black Friday.  Either you love it…or you hate it, and think anyone who goes is a little crazy in the head.  Maybe both are true. If you’ve never done the whole stay up late or wake up early thing, it’s probably because you hate the idea of battling people for the latest Polly Pocket. Or, maybe sleep is more valuable to you than a good deal. Or, perhaps you just haven’t learned the right strategies to make it worth it. I have gone for the last several years and I have learned a few things that have helped make it a success for me. I usually get completely done, or at least close to done in one shot and spend  a lot less.  Here’s the scoop:

Do your research early! Make your lists of what items you need.  Don’t get sucked into buying things just because they’re on sale.  You’ll spend way more than what you are trying to save by going out if you’re buying up all the “special buys” that you don’t need.

2. DON’T go for the doorbusters!

Retailers are geniuses at bringing in a few doorbusters to draw us in like suckers.  We’re like moths to a flame! Read the fine print.  You know that 60 in. TV they’re advertising for 26 cents?  They have might have 1 or 2 of them per location.  By the time you wake up at 3 a.m., and stand in line in the cold, you’re so set on the TV that you settle for another model at their regular sale price. Typically people who actually end up with a doorbuster, have the fastest legs or sharpest elbows!

3. Only go to the stores that have MULTIPLE items you are looking for.

Like I said, if you go to these stores expecting doorbusters, you could be utterly disappointed. Go to the stores that have a bunch of the little things you need.  Last year I got a couple WII games, about 5 or 6 DVD’s,  art supplies, all my stocking stuffers, and a blu-ray player all at Target for about half the price I could have gotten them somewhere else.

4. If you take a friend, DON’T shop together.

I always do Black Friday alone. Believe me you’ll get half of what you want to by trying to accommodate both of your lists.  If you do go with a friend, split up and whoever gets done first is on line patrol.  People , including myself, frown on saving spots in line, but give them a direction or if you both only have a few things, go dump them in your friends cart and pay them back later.  You’ll get a lot less dirty looks than if you’re letting someone cut in line. Think of it like carpooling for checkout! 🙂

5. There ARE other opportunities to save money!

Be courteous! Yes, you did wake up early to get killer deals, but so did a lot of people.  Don’t let the mob mentality get to you! There are plenty of opportunities before Christmas to get a good deal. Cyber Monday and online retail sales are soon to follow, so relax and know that Black Friday won’t make or break your Christmas gift experience!

Hope this helps everyone to enjoy this fun tradition the way I do.  Have a good time, drive safe, and let me know what kinds of deals you snag!